🤝 A New Way to Cross Promote Your Top Partners

Loving partner recommendations and showing love to your top partners on HTR?

Ever wish there was a way for your top partners to promote you to their customers and vice versa?

Well...now you can! Introducing the all new Favorite Partners Feature. 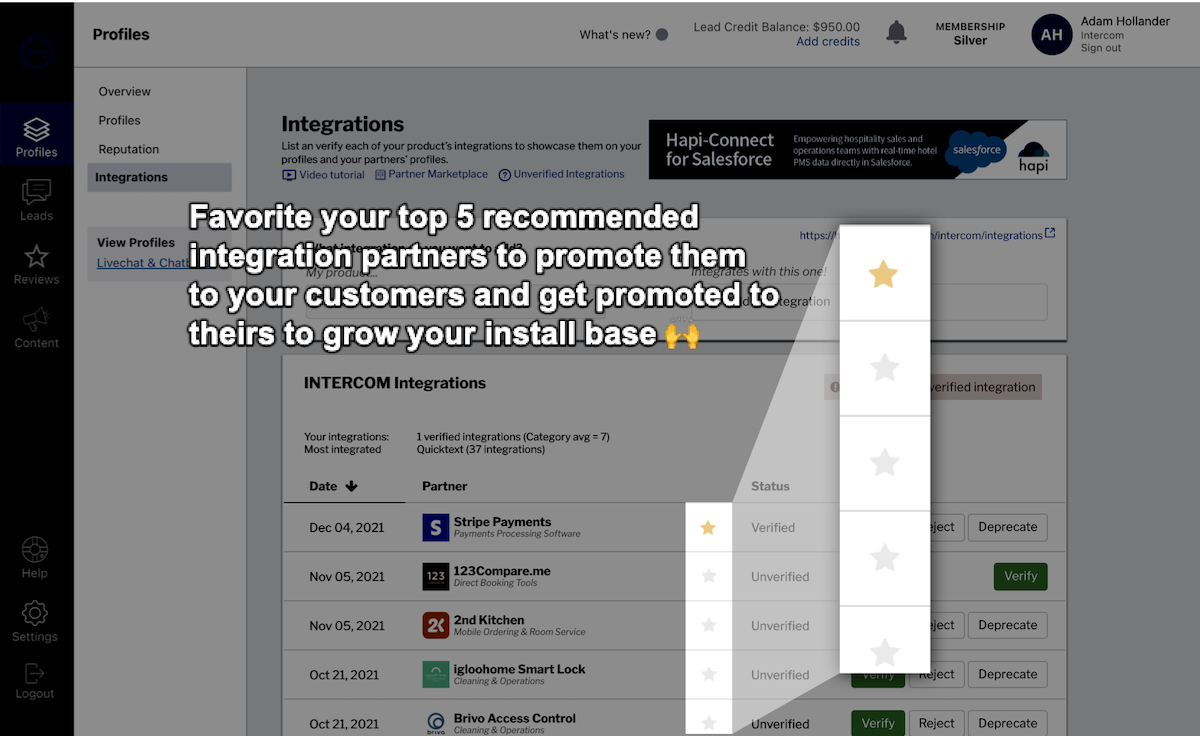 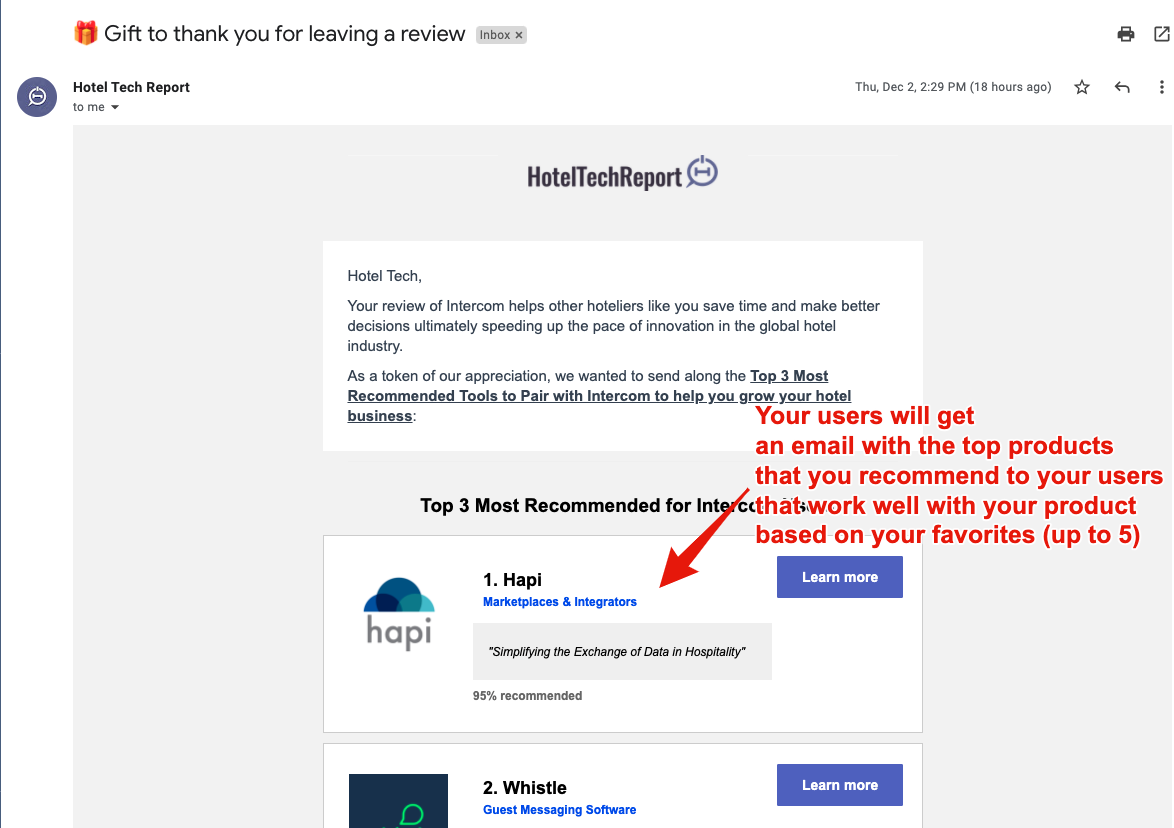 It’s Cyber Monday time! And for the entire week, we’re dropping our prices like never before.

Plan ahead for 2022 and save big on advertising, sponsored content, membership packages and more to educate buyers, build your brand and grow your install base in the year ahead via the HTR platform and our audience of 165k monthly hoteliers  🚀

Crazy deals on: 🤑 Premium Membership. 🤑 Lead Generation, 🤑 Sponsored Content and 🤑 Advertising.  Just make sure to place your request by next Friday (12/11/20) before these sweet deals expire.

If you'd like to learn more about any of these offers please reach out to us via live chat from your vendor dashboard or request a copy of Hotel Tech Report's 2022 Media Kit detailing audience metrics, pricing, and marketing solutions.

Terms: Cyber Monday deal codes expire Friday 12/11/21 and may not be combined with any other promotions or discounts.  All offers are final sale.  Basic members who attempt to access premium member pricing will have their cards automatically charged for the difference.

It has come to our attention that a handful of vendors were unaware of HTR’s policy not to allow direct incentive reviews on Hotel Tech Report so we wanted to reach out to all vendors and clarify HTR’s policies about incentivized reviews to make sure there is no confusion.

There have been three separate occurrences of vendors in the community being reported for pay-per-review (scenario 3) which is a level 1 infraction but none-the-less, an infraction and against the rules of the HotelTechAwards.  Since the inception of the annual HotelTechAwards four years ago, the rules have explicitly stated that direct pay-per-review is not permitted.  The reported incidents were Level I infractions (scenario 3) and were not found to introduce explicit bias.  Given that there have been several occurrences all claiming that the nuances of the permitted incentives were not clear--vendors identified will not be immediately disqualified from the competition however they will incur the following penalties:

Vendors have shared 3 main reasons for the confusion around review compensation rules on the site: (a) HTR allows indirect incentives/giveaways (b) pay-per-review is permitted by other review websites and (c) pay-per-review is common in the B2B reviews space.

Despite these points, HTR’s current (and historical) policies don’t permit pay-per-review (only randomized giveaways).  After discussing with hoteliers and vendors, we have found the consensus belief that pay-per-review should be permitted if certain conditions are met to disclose incentives to website visitors and hotel tech buyers.

The general governing body for online reviews and issues around consumer affairs is the FTC, which states the following:

In light of community feedback and FTC guidelines, HTR will amend our policies after the current year awards competition to allow for direct incentives when there is fair disclosure (effective January 15th, 2022).  Disclosures will be incorporated into the hotel tech buyer user experience on the Hotel Tech Report platform.  So how will this work?

Ultimately, incentives are a positive and encouraged mechanism to thank customers for their time, effort and expertise but all endorsements must reflect the honest opinions or experiences of the endorser (Source: FTC Endorsement Guides).

Therefore while HTR will be expanding its incentive guidelines to permit direct incentive reviews, these reviews will carry a clear designation to consumers about the nature of the incentive.  Additionally, companies who have been in breach of this rule to date will receive penalties commensurate with their breach to ensure that (a) the behavior is immediately corrected and (b) reviews collected in this manner will not be counted towards the 2022 HotelTechAwards competition but will not be deleted fully from the site as they will be re-added after the competition is over with the new incentivized review designation.

Likelihood to Recommend Rating Into Focus

Previously the review form used to capture an overall rating and a likelihood to recommend rating.  Since both were essentially two versions of an overall user rating they were duplicative which is why likelihood to recommend was (and always has) been the 'overall rating' factored into the HT Score to avoid duplicative counting of similar ratings.

In order to simplify the review form and show the more important variable front and center, the overall rating (/5) has been deprecated fully to reduce form fields and avoid capturing ratings that didn't count towards scoring and likelihood to recommend now shows in the UI in areas where the overall rating showed previously.  Likelihood to recommend has always been the most important rating in the HT Score and therefore it is being moved front and center in the UI to better reflect its significance.

As a result, there are three areas you will see the likelihood to recommend rating surfaced as the focused variable: 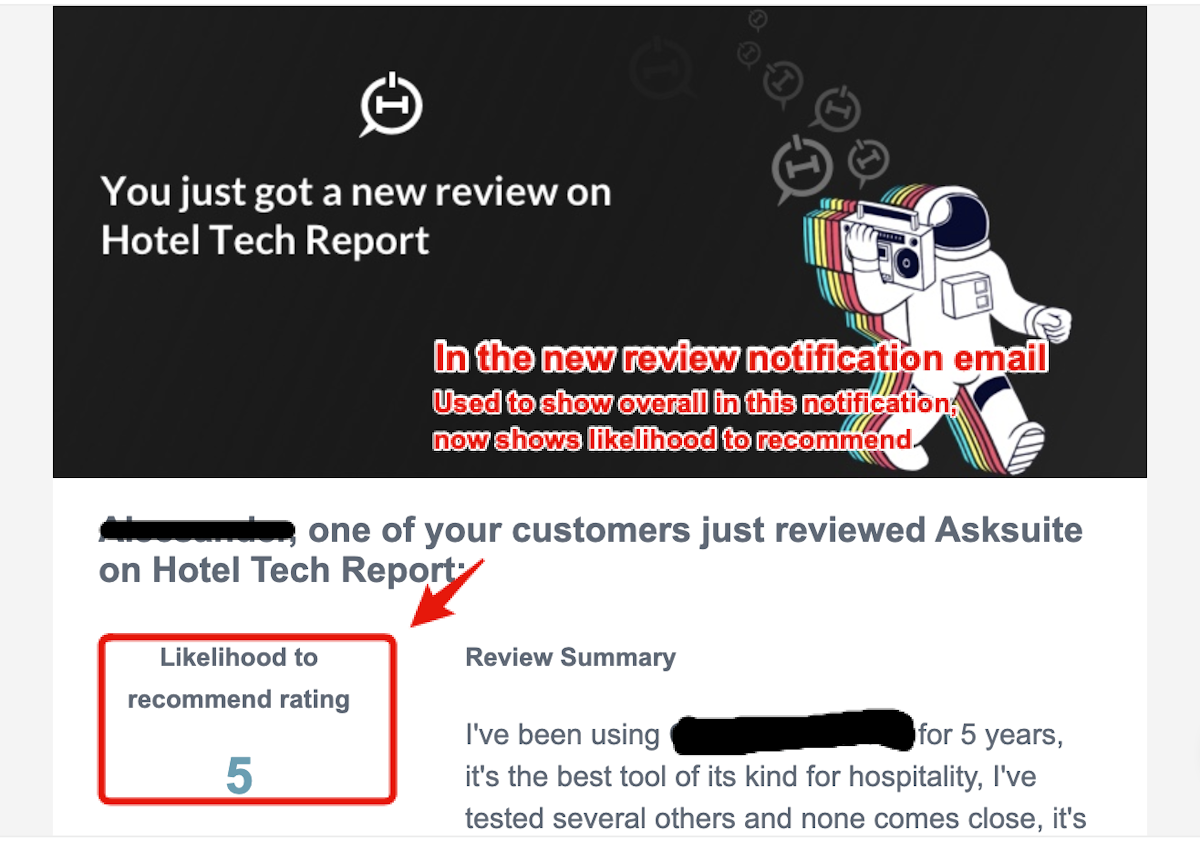 3. Moved Into Focus in the Review Manager 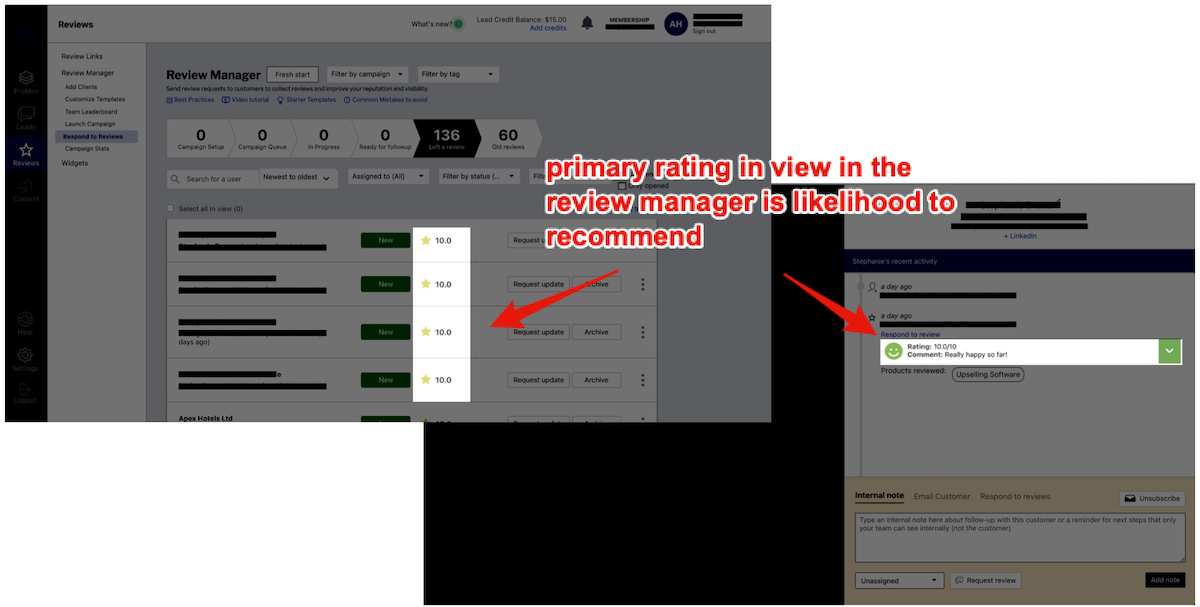 This week we're rolling out several new features to the review manager to help streamline your workflows and make it easier to filter through large lists.

1a. Clear out customers that you no longer want in the review manager

1b. Clean out your review manager to start fresh with a single click 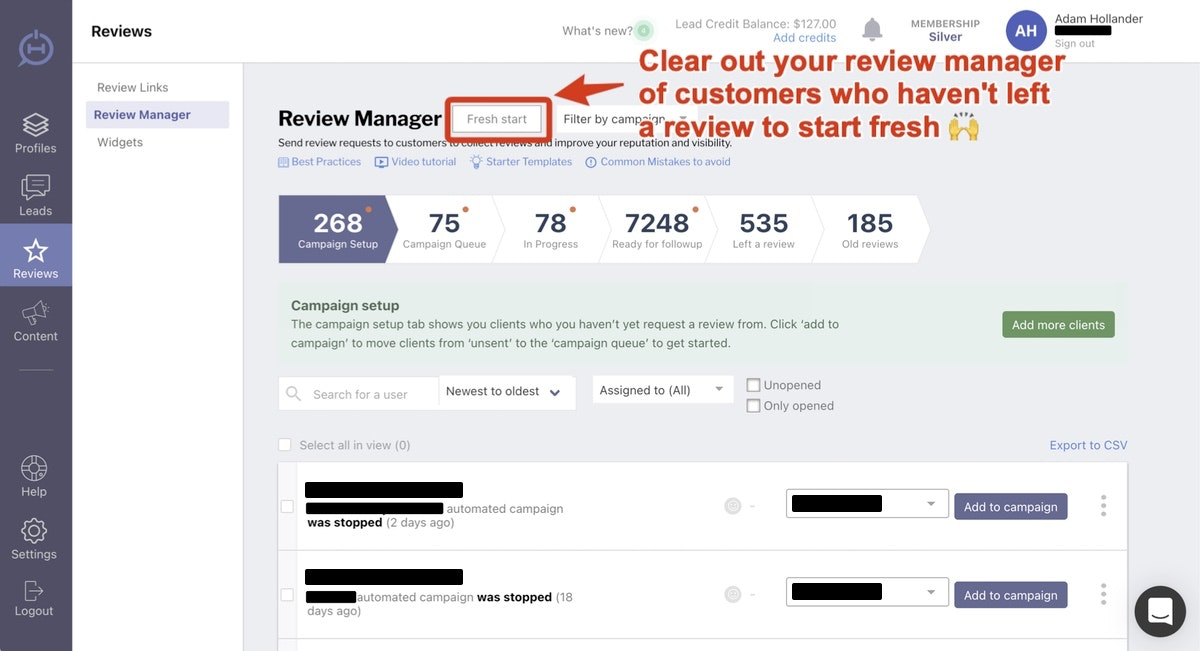 The archived tab used to be a place where you could send customers that you didn't want to send further communications to but it showed in the flow of the review manager which was a bit confusing because it meant a customer could have left a review, but they could also be in archived.  Instead, we have deprecated 'archived' and rolled out 'unsubscribed'. 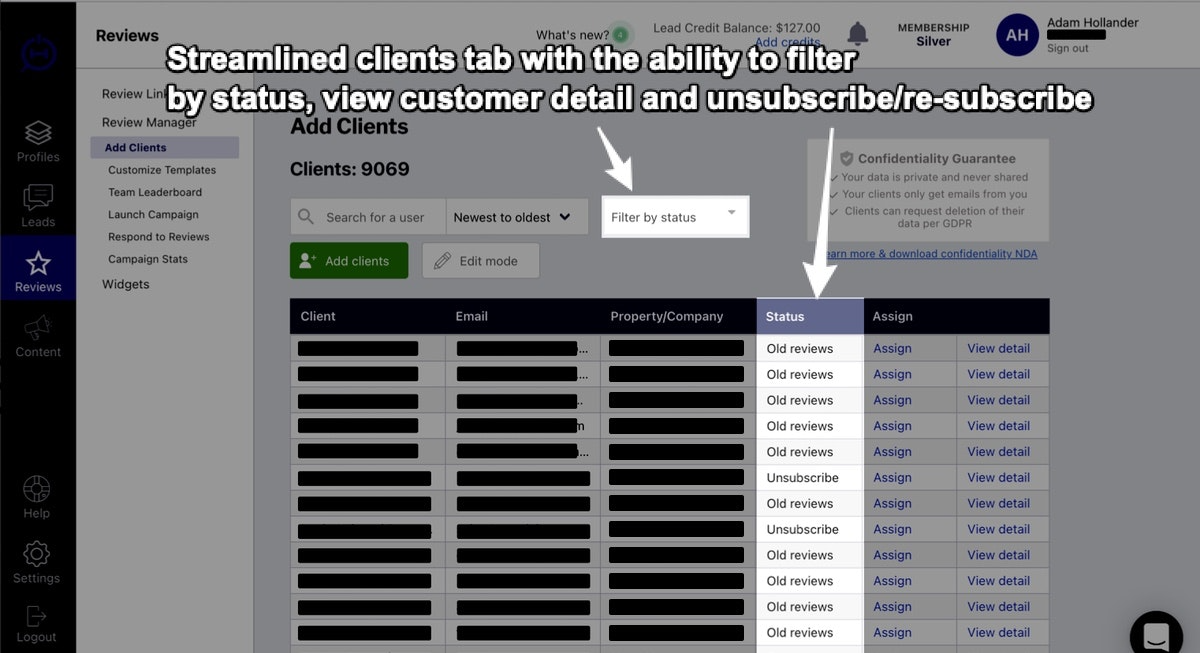 2a. Pick up where you left off with ease

3a. Filter the entire review manager by campaign

When you've run dozens of campaigns and have thousands of customers in the review manager it can get really overwhelming and difficult to figure out how to filter the data to make sense in a way that is actionable, not anymore. 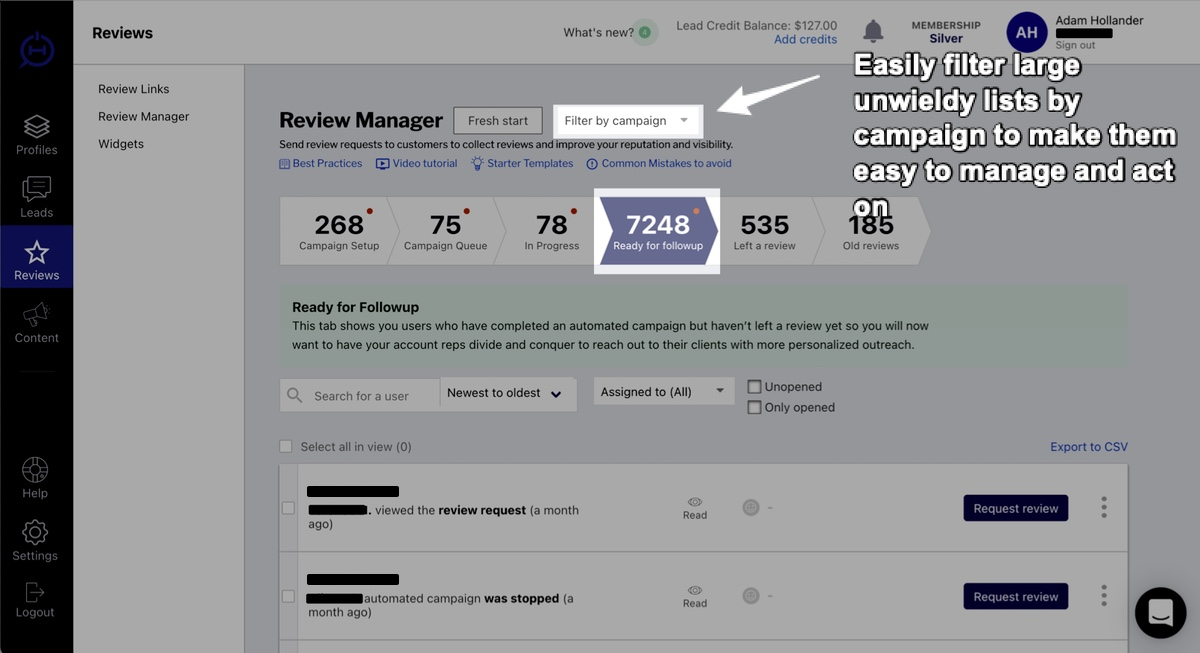 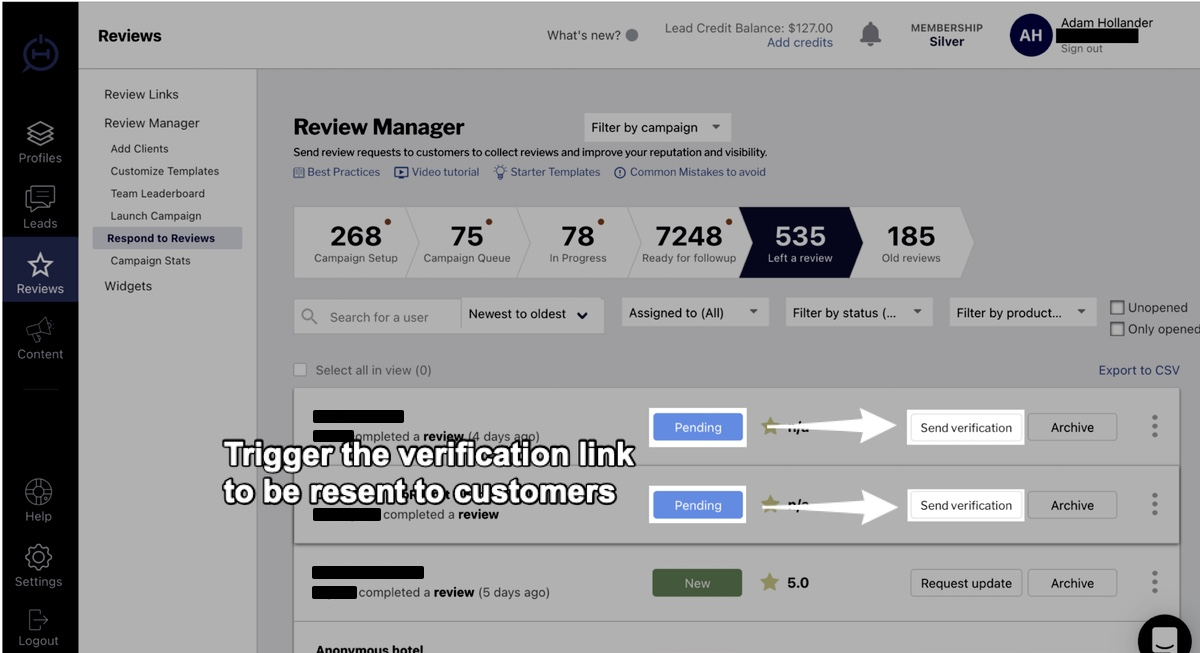 4a. Export customer statuses to leverage in your own tools 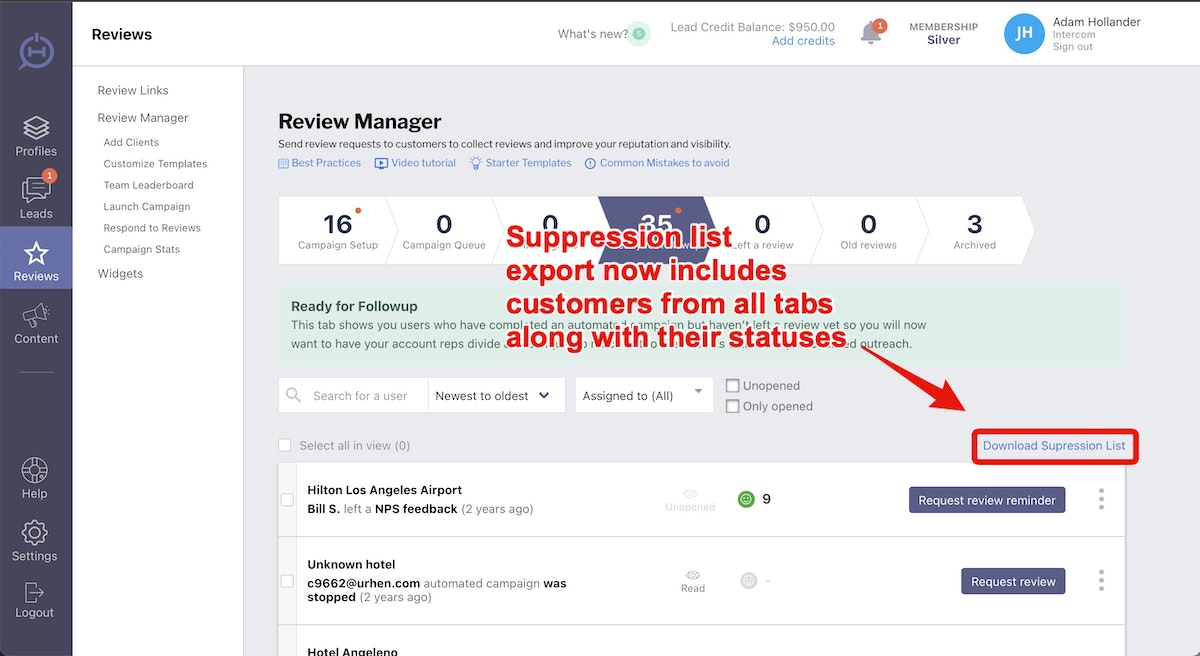 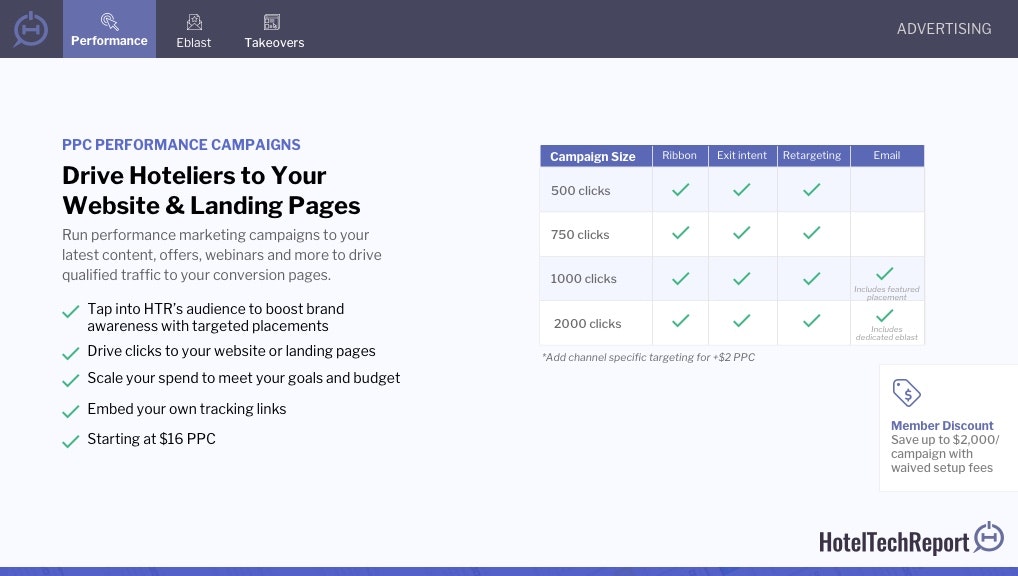 Despite this report being themed around HITEC, we know many buyers and sellers in the industry will not be in attendance this year and are therefore accepting applications from all companies regardless of trade show attendance.

The submission deadline is Friday September 24th at 5:00 P.M. PST to get featured.

Submit your innovation to get featured

Its September 1st and the annual HotelTechAwards officially kickoff today! 🏎  🏁

This is arguably the most important HotelTechAwards competition ever. The last 18-months have seen the hotel industry undergo an unprecedented digital transformation.  During this same period, thousands of hotels around the world have changed ownership (or management) and the hospitality workforce has shifted dramatically.

This game of musical chairs amongst hotel tech buyers is creating opportunities for the top hotel tech companies to pull away from the pack.

What separates the best hotel tech companies from the rest?  That's where the HotelTechAwards come in: using data to measure customer satisfaction, partner ecosystem strength, customer support processes, peer trustworthiness and more to determine the most loved products in hotel tech according to the judges that matter most, hoteliers.

Almost every major hotel tech company from San Francisco to Sydney is registered to compete in this year's awards for a chance to win the most coveted award in hotel tech so make sure to start collecting reviews asap to increase your chances of winning.

Below please find a few tips to help you kick things off strong and as always, if you have any questions along the way feel free to reach out anytime via the live chat on HTR--we're here to help!

Learn how to launch an automated campaign

Phase II of the Poseidon Algorthim update is now live.  This means that the new rankings that were only vendor facing in the vendor dashboard in Phase I can now be viewed live on HTR throughout the entire site both the hotelier facing site as well as the vendor dashboard.

If you have any questions about the algorithm updates please refer to the scoring documentation or the Phase I announcement.  If you're looking for personalized tips to improve your reputation, rankings and visibility--check out the Report Card and Coaching Checklist in your vendor dashboard.

When does the 3rd and final phase of the update go live?

The final Phase III update (Client bias/Share of Voice variable) will be rolled out with the introduction of the Client Bias ranking signal no later than 11/1.  Per the June 16th update:

Client Bias (aka. Share of Voice). Hotel Tech Report’s policy has historically been to accept reviews from multiple users at a single hotel due to the fact that every user has a unique opinion/viewpoint on software.  Having said that, collecting lots of reviews from only a handful of customers that aren't representative of your overall customer base indicates potential risk of bias.

What is the client bias update?

In this example, you can see that while both vendors have the same # of reviews, this is not an apples-to-apples comparison when it comes to credibility and install base since Vendor A has 30 verified hotel clients and Vendor B has only 1.

The Share of Voice variable will help identify potential client selection bias (aka. cherry picking) that can arise if a vendor is strategically only asking for feedback from a select number of clients versus reaching out to their full install base.

Who will be impacted by the client bias update?

Most companies will not be impacted by this update.  The only companies that will be impacted will be ones who have selectively sought to only seek feedback from lots of users at a small sample of client hotels.

*Note: You can still get a handful of reviews from a single property; however, if all of your reviews are coming from a small amount of properties the algorithm will identify this as potential cherry picking/gaming and your score will be impacted as a result

What can we do to maximize our score for the client bias update?

Just make sure you are reaching out organically for feedback to your client base instead of cherry picking select clients.  Also, take note that while you may certainly collect a handful of reviews from different users at a given hotel--if your strategy has been to try to game the system and collect tons of reviews from a single hotel (or small number of hotels) this will be identified by the algorithm update and your score will be impacted.  Hopefully it goes without saying but...make sure you're review collection is organic, representative and diverse and you are not trying to game the system by gathering lots of a reviews from only a few select clients.