Earlier this morning HTR sent out the annual year in review notification email to all HotelTechAwards participants recapping your annual campaigns.

In order to send this email HTR exports data from the frozen database as of the 12/15 5pm awards deadline and maps the 27 merge fields and data points via Zapier to populate and send the automated notifications.

Shortly after sending the notification, we identified that one of the 27 fields was not mapped correctly and was fetching from the incorrect column which was the 'final score points value' (shown below).

Please note that this is the only of the 27 variables that was not mapped correctly and in no way impacts your ranking in the awards.  The data to audit in the email is all of the inputs of the raw points score which were all correct (eg. reviews, integrations, partner reccs, employee survey completions, etc). That said, if you would like to receive your corrected/true final points score from the frozen database please reach out via the live chat on site.

We apologize for any confusion this may have caused and please feel free to reach out with any questions you may have. 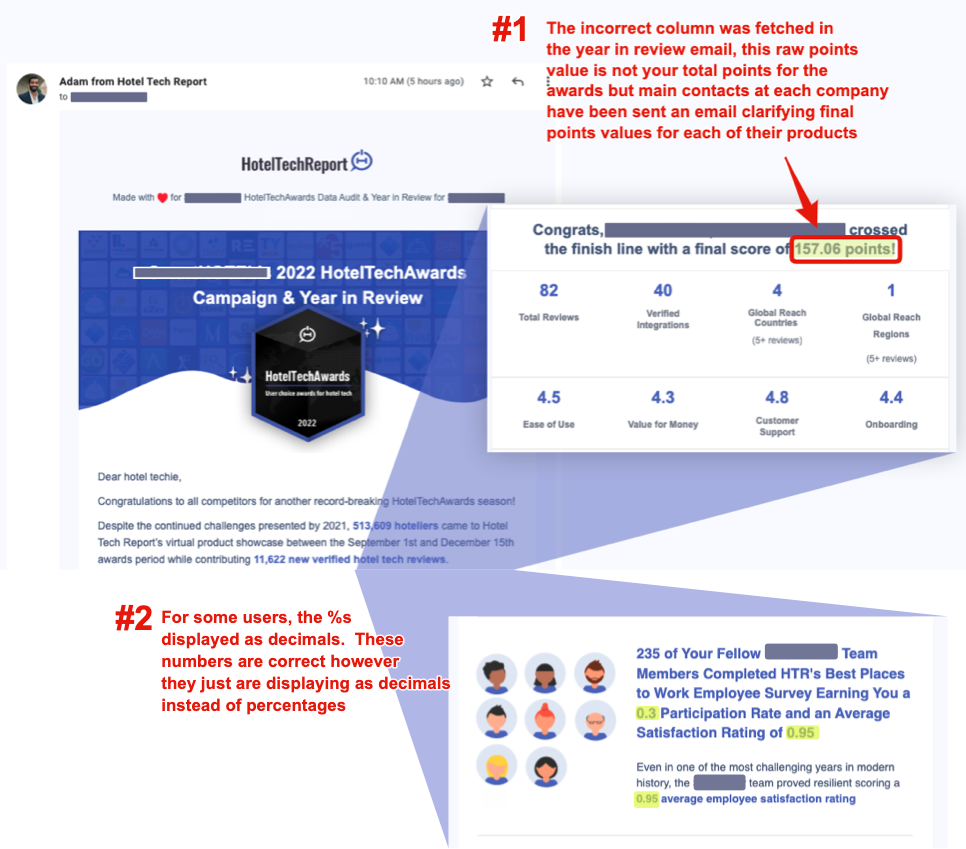 HTR recently became aware of an edge case related to the mapping of country codes to regions that was introduced along with the deployment of the Poseidon Algorithm update that we are working on a patch for that will be deployed in the next couple of days (expected go live week of 11/22).

HTR typically pulls country data from the popular Google Places API (excluding mainland China reviews); however, a select group of countries and regions were found to be “unmatched” in the lookup function causing some vendors to experience artificially deflated country counts in their HTScore indexes.

Which countries were identified to have potential mapping issues?

Below is a list of countries that had anomalous entries in the database and were updated in the lookup function.  One such example is that 517 reviews in the database were classified as originating in ‘Czechia’ while the HTScore algorithm lookup function was searching for the term “Czech Republic” as defined by the Google Places API.

Please note that only a fraction of cases were impacted by these mapping issues in these countries so just because a country is listed does not mean all reviews from that country were not mapped correctly.

Who was impacted and what was the impact?

Most vendors will not notice any difference in their scores or the scores of other products in their categories.  That said, vendors with reviews from the following countries MAY have been impacted; however, not necessarily as these were anomalies and in many cases the review countries were properly classified.  Impacted vendors may have experienced an increase in countries and regions served which would in many cases increase HTScores from understated scores previously visible on the platform.  These changes are extremely rare and likely unnoticeable but some vendors may notice a several point increase in scores as the algorithm begins detecting their accurate country and region counts once the mapping patch goes live.

It has been brought to our attention that there is an issue with the new translation feature on the review form and that we are working to resolve.  Please note that this issue only appears to be impacting the review form and all other translated pages throughout the site are operational. 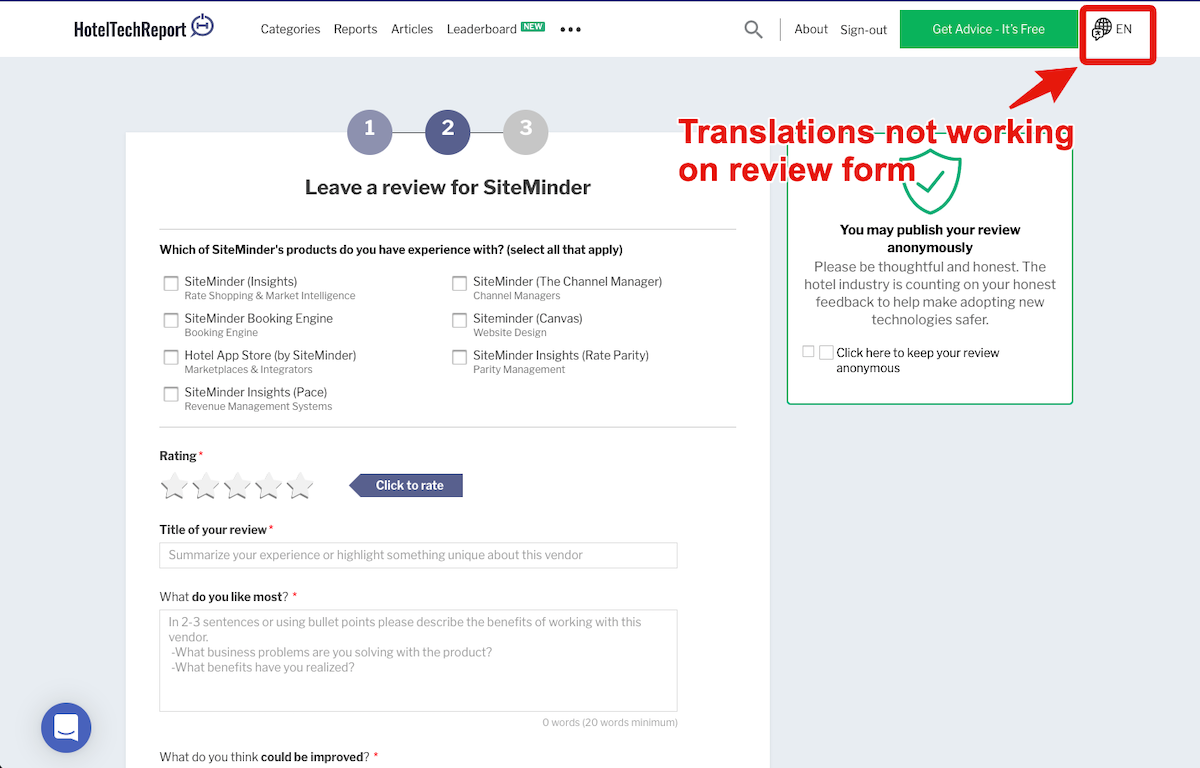 It has been brought to our attention that some users may be experiencing a site routing issue.  HTR's hosting provider had an issue this morning that overwrote our DNS settings and was quickly resolved but may take up to 24-hours to propagate.

The issue has been resolved but we appreciate your patience as it may take up to 24-hours for some users to be able to access the site without the error message.

These reports all came in within an hour of eachother and appear to be due to a backed up queue and we believe this is an isolated incident but the issue is still under investigation.

This issue should not occur again but if it does please report it to HTR via the on site live chat so we can further investigate the matter.

Apologies for any confusion or frustration that this may have caused 🙏

We are currently experiencing performance issues due to unprecedented site usage.

We have increased server capacity which should temporarily resolve most issues and server capacity is now in healthy levels (see below) so the site should be back online but you may experience intermittent slow load times while we implement a more permanent fix.

We apologize for the inconvenience and are working diligently to resolve this issue ASAP.  Please note that data is still being captured and stored properly including reviews, partner recommendations and integrations despite lag or error messages users may encounter.

Recently we rolled out the New Integrations Experience with fast add flows for integrations.

Recently with companies listing exponentially more integrations all at the same time, our infrastructure has been overloaded leading to some integrations being duplicated.

We are investigating the issue and will keep this ticket updated with latest status as we identify the problem and implement a solution.

Thanks to our 🐛 bug hunter of the day Sara @ Mews!

If you notice any legacy duplicates please reach out via the live chat.

As a way to monitor review form conversion and make sure we capture as much content as possible in the event of a reviewer having an issue with the review form we capture partial review content.

This is solely for internal monitoring purposes as these reviews cannot be published since they are (a) incomplete and (b) lack verification and approval from the user (since they did not finish the form and submit their review).

Last week when we rolled out a performance improvement to the automated review manager some partial reviews appeared as 'pending' reviews.

This issue should now be resolved but please feel free to reach out with any questions or if you are still seeing a partial review in your vendor dashboard.

We apologize for any confusion this may have caused.

Last night several users reported that the final submission step on the review form was returning an error for some users.

We have investigated the issue and found the cause which was recent performance improvements that were rolled out to the review manager which introduced the issue for organic reviews.

NO IMPACT TO REVIEWS LEFT THAT ENCOUNTERED THE BUG

Any users that left reviews would have already completed their review (since it was only on step 3, the final submission step) and therefore their review will be published and won't be impacted.

Any non-members registered in the 2021 HotelTechAwards will have 30-days of unlimited access to run unlimited campaigns (to unlimited users).

This is a new benefit for 2021 HotelTechAwards participants and gets automatically unlocked based on registration.

HELP FOR COMPANIES IMPACTED: All non-members will get an additional week added to their 30-days access extending their access from September 30th to October 7th)